I feel like I am forever prefacing my posts with 'I'm sorry' - so let's skip apologies for the delay in getting this post to you (oh darling readers o' mine) and get into the good and juicy details.

Sunday morning I woke up with the most mixed emotions. I was excited that I would be able to spend the morning side by side with one of my closest friends, and later found out that I would get to join in breakfast celebrations too, which just boosted my enthusiasm for the morning tenfold. But I was anxious as a mother clucker because it was hand down the most unprepared I have ever been for an event. The event was the HBF 12km run and, although my darling assured me that it would be for 'fun' and there was no pressure, I naturally in my true virgo styles put pressure and expectations on myself and from the get go felt like I'd flail.

I thought, to make this post readable and not a tedious play by play of the morning, I'll crack the subheadings and give you the important deets. Sound good? Yes!

Pre Race
Prepared myself with a piece of rye toast and honey - a pre race tradition and one that's proving hard to break. I stretched. Freaked out. Had nervous tummy. Texted. Googled and instagramed for inspiration. And basically killed time until my inevitable undoing. Yes pessimistic Emily was in full swing on Sunday in the am! 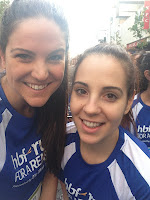 Feeling empowered and all 'girl powered' at the start line I felt for the first time that morning that 'Yes, I can do this and I won't die'. I loved the pre race chatter between my friend and I at the start line. We covered philosophical topics, trivial pointless chit chat, gossip, d and m's and everything else in between - keeping this running tradition with this girl is what got me up that morning and I just hoped it was enough to fuel me for the run. I made myself a promise - that I would give 110% Whether that meant running the full 12km straight or only making it 1km in - I would give it my absolute all.

The first 5km
Felt fabulous. We ran in unison and chatted and the kms seemed to tick over. I might add though that one of the attractions (because of it being such a novelty), as well as being the world's biggest pain in the ass, fell within the first 5km of the run and that was the freakin' freeway tunnel. Whoever the genius was that suggested having 30, 000 runners passing through the nil-air-flow tunnel at the beginning of a long run should be slapped. Hard. The tunnel is never fun and was actually the point of my emotional breakdown last year so I just swore to myself that I would get to the other side without stopping and that would be my little 'Everest'. Hurdle number one accomplished. We made it to the other end alive and this was made even more impressive by the fact that the tunnel resembled a fart-tube by the time our little shoesies trotted on through. Pee-ewww.

The 6-8km Marks
Oh good lordy. This is where everything started feeling a little weird. I just felt empty and weak, my mind felt a little shakey and faint. It's hard to know whether this was legit, because I've had a bout of feeling a bit like this over the past few weeks, or whether it was all in my head. I walked bits and pieces over this time in an effort to catch my breath and regroup. I wasn't having fun but loved every minute I was blessed to be spending with my friend in the sunshine so I kept on going. Running and walking and trying to convince myself that I still had more in me. 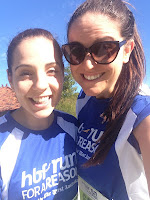 Something clicked. My beautiful friend proclaimed her belief in me (thank you chicken!) and I decided that I wasn't done and I had more in me. I pushed myself so hard mentally over the next 4km and I can say, hand to heart, that I had nothing left in the tank at the end. We crossed the finish line in 1hour 16min and averaged a 6min30 pace. Not a fab time but believe it or not it was actually a PB (I later discovered) so I am extremely happy. My amazing friend killed this run and I know that she could smash out a 60min run if she wasn't supporting me so I am so grateful that she sacrificed her run to see me over the line. 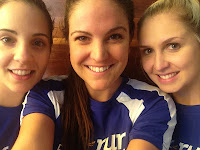 Good food, a cup o' hot coffee, beautiful company, incredible chats. I freakin' adore breakfast. The best possible post race reward - nutritionally and emotionally. I left feeling like I could run another 12km. I had that much energy and adrenalin, but alas I didn't even attempt it. I was done and dusted baby!

The Aftermath
Somewhere between breakfast and bedtime I went wrong. My knee seized up and I was left with pretty intense pain on the side of my right knee. I hobbled up and down stairs at Subiaco Oval (go the Dockers) and I knew something was up. I googled (and prepared myself for the inevitable misdiagnosis and scary worst-case-scenario suggestion of 'cancer' to pop up) and it turns out my symptoms were pretty on par with Runner's knee. So I had a date with a bag of ice, a heatbag and some ibuprofin. I've taken it pretty easy since Sunday, doing my first semi intense workout this evening, and so far so good. The knee feels back to normal and I'll test it with a sneaky run this week.

Take Home Points
+ You can always push yourself further.
+ The support you have on your runs can make or break, choose running buddies wisely and don't steal mine because I need her.
+ Get involved in community events because they will set your motivation-meter to overdrive.
+ Set yourself goals and avoid going into a run 'blind'.
+ Prepare, mentally and physically, for whatever challenge you set yourself.
+ Count your blessings and enjoy the journey.