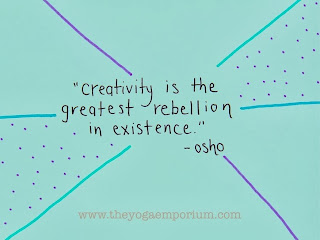 I spent my 25th birthday solo, for the most part, as I gifted myself the day off and spent it doing whatever the heck I wanted to. And, as we all know, an unintentional byproduct of 'alone time' is often extra time dedicated to thinking, dreaming and scheming. So that's how I spent mah birthday!

What I really wanted to do was uncover a word (or three) that summarised what I chose to focus on in my year ahead. I sort of meditated on that thought, in an effort to listen in on what 'inner Emily' most wanted, and they were -

Authenticity and alignment had come up for me before but 'creativity'?! Girlfriend cannot even manage a paint by numbers! Why the heck would I ever pursue my creative side (or lack there of)? But, I accepted that it had come up for me, and respected that this something that 'inner Emily' wanted. Who am I to argue with that babe? Of course, as the universe has a habit of doing, all things creativity came in hot and heavy. It was discussed in my books, resources for developing creativity in my writing seemed to pop up at every turn, even at my Speech Pathology clinic there seemed to be an abundance of 'creative ventures' suddenly appear! Oh and did I mentioned I just happened to turn on the ABC one night and see an episode in a series on 'Brain Training' and, yep you guessed it, the episode was dedicated to learning how to expand your creative genius.

So with my goal word firmly ingrained in my mind, I set off about my life, learning when it came up and taking opportunities whenever they arose. And then I met Lacey Haynes. Lacey was the guest speaker at the beautiful Passions & Possibilities event hosted by the gorgeous Emily Ehlers. Lacey spoke about passion, yoga, shared her stories, spoke on creativity and led a group meditation. I.was.entranced. And it wasn't just her freakin' adorable Canadian accent (I have never ever felt more calm during a meditation in my life. She has a gift. And a good accent for it. But mostly it's the 'gift' thing). After mingling and nibbling on raw desserts, I eventually crossed paths with Lacey and we shared hellos and chatted about travel and yoga and the possibility of Lacey running a workshop in the South West (!!). THEN she dropped a bombshell, and unknowingly added another mark on the tally for Universal Intervention vs Emily, and revealed that she was about to launch an e-book called 'Yoga and Creativity'.

Which brings me to the true purpose of this post (a full 3 paragraphs later but you know I'm a talker so y'all will forgive me I'm sure) - my new creative adventure. The Yoga and Creativity e-Book launched on Tuesday and I scooped it up (new age translation - clicked & downloaded) within a nanosecond of Lacey's email. 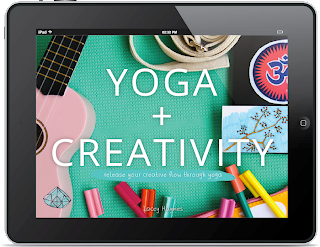 Lacey explains 'Why Yoga and Creativity?' -
"Yoga and creativity are so meant for each other. Creativity is your truest essence and yoga is the path to put you in touch with these deepest layers of who you are. The more you unfold your body and mind, the more the creative juices flow. Throughout this guidebook, you'll be challenged to face your creative fears and blockages all in the name of freeing up space so that you can connect with who you truly are."

The guide gives you options and suggested time frames for completing the program - 4 week intensive; play and go at your own pace or a 6 hour yoga and creativity day of bliss! I opted for the 4 weeks - to really explore each section thoroughly and not leave creative stone unturned.

This week has kicked off with a beautiful yoga practice; focus on my throat chakra (the chakra for communication and creativity) and a whole lot of off-key singing! It was been so much fun. A real 'key lesson' for me in this whole process has been something that Lacey addresses early on in her guide -

"It is important to remember that creativity and talent are not synonymous. What you need is to be curious and believe that there is a creative world inside of you." 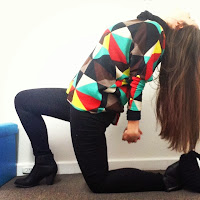 Want this incredible book and to uncover the best ways to expand your yoga and creativity practice? Then head over to the Yoga and Creativity homepage and get your journey started girlfren'. Just incase people were wondering - I am lucky enough to be an affiliate for this incredible program, but wanted you all to know that I happily agreed to this as I absolutely adored this book and it's message from the get go, and would never ever endorse something that I didn't believe in or support wholeheartedly.

Blessings, back bends, songs about lunch and a creative tigress ready to be released x